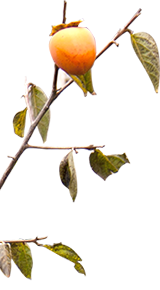 An artistic workshop had been held every year led by artist Anken Kidani at Karako Elementary School. This year, celebrating the 10th anniversary since the planting back in 2007, the third grade pupils exchanged video letters with pupils of F. Fellini Comprehensive School in Italy, and made ornaments to decorate their tree and another Kaki tree also planted in a nearby park. The anniversary ceremony was held on December 6th, and 76 pupils sang songs around both trees at their school and at the park.

On 31 October 2011, “Experience Kaki Peeling” and “Kaki Peeling Competition” were held at Takaho Primary School in Suzaka City to commemorate the 10th anniversary of the planting. The members of Takaho Regional Development Promotion Committee visit the school every year for the last few years to organize these events since the kaki tree planted on 1 March 2001 first produced fruit. As 4 pupils on behalf of the school visited Nagasaki in August this year and Mr. Ebinuma also came from Nagasaki to attend, the “Peeling Competition” was greater than usual. Firstly, the 4 pupils who visited Nagasaki reported with pictures that they visited the bombed tree and its… Read more »

On 27 February 2001, the kaki tree was planted at Mishima Gakuen Girls High School. The school has changed its name to Tohoku Seikatsu Bunka University High School in the last decade and has changed a lot – it is now a coed school and the number of students has also greatly increased. The tree planting ceremony was held on 30 October 2010, which was also the 110th anniversary of the former Mishima Gakuen. The “Revive Time” Kaki Tree Project in SEIBUN – The Harvest of KAKI consisted of three parts. The part 1 was the 10th anniversary ceremony held at the Kaki Tree Square and members of the student… Read more »

Two kaki trees were planted on 5 February 2000 at Tsukioka Primary School and the 10th anniversary event was held on 27 October 2010, the school’s foundation day. The then-school principal and artist Mr. Michio Horikawa and tree doctor Mr. Masayuki Ebinuma from Nagasaki attended the ceremony. First, all pupils gathered in the school gymnasium and listened to Principal Mitsuo Yoshida’s talk on the history of the school and the planting of the kaki tree 10 years earlier. Then they watched the Kaki Tree Project DVD, listened to Mr. Ebinuma’s talk and participated in Mr. Horikawa’s workshop “Making Orizuru (folded crane).” The special kaki tree pattern, made from the photo… Read more »

On 25 March 2000, a kaki tree was planted in the courtyard of magistrate’s court in Carpi, Italy. Then after ten years, on 8 May 2010, the 10th anniversary event of the planting was held and more than 200 children participated. As the anniversary’s theme was “From roots to leaves,” children were regarded as “leaves” and their grandparents were “roots”, and they examined the connections between them. In class, children expressed the relationship with their grandparents freely on the drawing. All the drawings were put together into a book, thanks to the support of the Rotary Club Carpi, and the books were distributed to the participants of the anniversary event…. Read more »

The kaki tree was planted in the foreyard of San Giovanni, the former church in Casciago in the Province of Varese, Italy on 18 March 2010. The tree planting ceremony at the former San Giovanni church. Planting Ceremony / Chiesa Vecchia di San Giovanni Ms Anniva Anzi Achini, who encountered “the seedlings of the bombed kaki tree” at Japanese Pavilion at Venice Biennale 1999, was so impressed that she planted the kaki tree together with the local Casciago people and children from “A. Manzoni” Primary School. Since then, the city of Casciago, mainly at A. Manzoni Primary School, every year celebrates the anniversary of the kaki tree planting and has… Read more »

The kaki tree was planted on 21 March 2000 in the center of the courtyard of the St Giulia Museum, Brescia, Italy. The planting ceremony of the St Giulia Museum Artist Dulio Zogno, who encountered “the seedlings of the bombed kaki tree” at Japanese Pavilion at Venice Biennale 1999, contacted the Japan Cultural Institute in Rome many times about the Project because he was very keen to make it happen and it did take place. Since then, many plantings are taking place every year in different cities in the Province of Brescia thanks to the cooperation of Mr. Rosario Manisera of Associazione cultural italo-giapponese Fuji. The 10th anniversary ceremony was… Read more »

On 5th of March 1996, the very first planting of “the seedling of the bombed kaki tree” took place in the schoolyard of then Ryuhoku Elementary School in Taito-ku, Tokyo. Children from the class 1 in the third grade participated in the event among others. Unfortunately, in March 2001, the elementary school closed and the tree was moved to the adjacent Ryuhoku Park thanks to then PTA members. Planting Ceremony / Ryuhoku Elementary School The 10th anniversary ceremony of the planting, “The Harvest of KAKI,” took place on 19th of August 2006. Under the kaki tree, which has grown to about 5m high, Ms Yuko Hatakeyama, who initiated the planting… Read more »

The name of Ogaki city used to mean “Big Kaki”. The Ogaki Castle is known as the place that had been occupied by famous commander while important battle in Japanese history in 1600. Due to that, it was registered as the national treasure. As the memorial event of that battle, the city government organized Ogaki Expo in 2000, after 400 years from that battle. Ms. Nobuko Yamada, a member of Ogaki Expo Executive committee, suggested planting kaki trees as the project for future, not only looking back in past battle. They made a musical about “Bombed kaki tree” for planting ceremony. After the expo, some members formed O-KAKI project executive… Read more »

Mr. Kakuya Matsumoto, a principal of Hirose elementary school, who was supposed to retire in that year, applied for planting kaki trees. As he was leaving the school he wanted to leave kaki trees as the significant message for children. At the ceremony, Dr.Ebinuma gave a special lecture for children to think about kaki trees, atomic bomb, and the war. Being impressed by Mr.Matsumoto, Tatsuo Miyajima hold a workshop “Kaki trees in ten years later and our 10 years later”. This workshop was consisted of two parts; shooting interviews to students of sixth grade, and drawing by whole students of the school. In interview part, they recorded 20 students of… Read more »

A director of Watari Pre School, Mr. Fukami applied for the project because he knew how important it is to extend message for peace through his experience of World War 2 that he lost many his fellow. This pre school set August 8th as “The day for bringing up peace” and has taught about peace on that day in every year since 1980. So they prepared for planting ceremony with parents of children. Before the ceremony, they sought applications for names for kaki trees and made a time capsule with message for their children ten years later. In ceremony, children announced that names for kaki trees decided “Kaki-maru kun” and… Read more »